What's With the Colors?

SVP is bold and bright—and we look a little bit different in each community. We invite you to get engaged in a personal way as you explore this website by selecting your own colors!

Other Communities We're In:

Lisa Bontje got the call at 10:30 on a warm July night. Sara was in labor.

Caught off-guard, Lisa panicked slightly. She had been out for drinks with friends and didn’t feel safe driving to the hospital. Fortunately, the woman on the other end of the line assured Lisa that the birth was a number of hours off.

Heading straight home, Lisa packed her gear. Tomorrow would be a first. She had been invited to photograph the birth of Sara’s child. The intimacy of the invitation overwhelmed her a little. She didn’t know Sara, but Open Arms Perinatal Services is an SVP Investee and works closely with new and expecting mothers – providing doulas and other support before and after birth. Both Open Arms and Sara were excited for Lisa to capture this part of Sara’s journey.

Taking a deep breath, Lisa lamented that her usual photography partner, Lisa Merrill, was out of town. She would be flying solo on this one.

Early the next morning Lisa received a second call and headed south from Seattle to a hospital in Burien. Entering the maternity ward, Lisa was stopped short. She didn’t know Sara’s last name, which proved a challenge at reception. And even once the staff confirmed Lisa was welcome, Sara’s doctor balked at having another person in the hospital room.

Minutes ticked away as Lisa anxiously waited, hoping she wouldn’t be too late.

At last, the doctor consented and Lisa squeezed into the packed room – encountering an unexpected blast of boisterous music. Sara was in the center of the room, flanked by family, nurses and two doulas – Deziree and Kate – from Open Arms. Deziree and Kate’s faces were filled with excitement and encouragement, and they seemed to pull everyone in the room together. Each person had their hands on Sara, creating a human cocoon as contractions surged and retreated.

Camera in hand, Lisa circled the room — getting lost in her role as documentarian — searching for the perfect frame or moments that captured the joy in the room as Jadalynn entered the world. 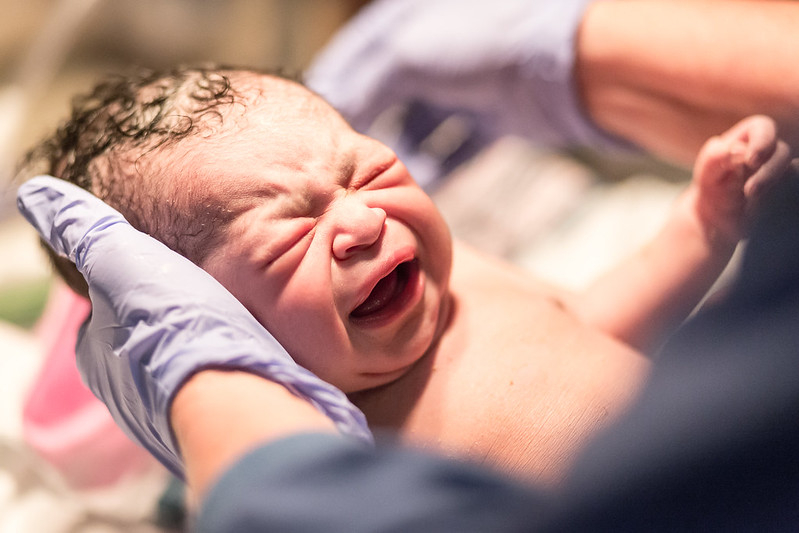 Explore the above photo gallery to see more of Sara’s special day and the birth of Jadalynn.
Photos / Lisa Bontje

Just an hour later, Lisa found herself sitting in her car shaking as she texted her husband Norm. “That was amazing,” she wrote – still flooded with near disbelief that she had been invited to witness something so intimate, so powerful and, in many ways, so different than her own birth experience.

Lisa’s understanding of Open Arms had also transformed. She knew about their different programs of course, but seeing Deziree and Kate’s connection to Sara and the way they showed up in that hospital room was totally different.

A few weeks later, Lisa shared her experience with a friend who marveled at the opportunities Lisa has as a volunteer. “You’re helping people tell stories, while getting all these new experiences,” her friend said. “I would love to do that.”

Lisa had to agree. It is opening up her world. And if she is honest, helping nonprofits tell their story is only part of the reason she volunteers. It’s more personal than that.

It’s about the interaction. It’s about spending a day in a pre-school scrambling around on the floor to get eye-level with the kids or sitting with teens who are applying to college for the first time or watching high school reading coaches with their third grade students. Volunteering helps Lisa step beyond her normal circles, to connect with people she might not meet otherwise and to become part of something bigger.

Lisa Bontje is a long-time SVP Partner and volunteer. (See more of her photos here.) Sara (who generously allowed us to share her photos) and Jadalynn are doing really well and we just recently learned that Lisa’s photos will be featured in a video documenting Sara’s journey into motherhood. Open Arms will feature part 1 of that video at their “Birthday Bash” on October 20. We hope to share that video as well. Stay tuned!

Join with donors and do-ers from across the giving landscape at the virtual We Give Summit.

Throughout May 2021, we are partnering with our friends at Philanthropy Together and more than a dozen other giving circle networks to host a series of interactive and virtual learning sessions, networking activities and much more. Learn more and secure your spot below.

REGISTER FOR THE WE GIVE SUMMIT